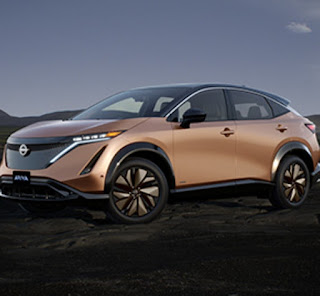 The all-new 2023 Nissan Ariya electric crossover model is getting closer to its upcoming U.S. on-sale date with the opening of a special reservation portal, giving customers the opportunity to be one of the first to purchase the most advanced and connected Nissan vehicle ever.
Four Nissan Ariya SUV models will initially be available for sale in late 2022.
The preliminary 2023 Ariya reservation model lineup, specifications and initial MSRP starts at $45,950 for the Venture+ front-wheel drive model. Pricing for additional Ariya models will be announced at a later date. 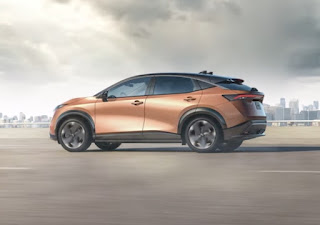 Additionally, the first 10,000 reservations made before Jan. 31, 2022 will qualify for a two year free EVgo membership plus $500 in charging credits upon purchase. That's worth up to an estimated 5,000 miles of EV driving for the Ariya Venture+.
The all-new Ariya is "the embodiment of the new Nissan," says Michael Colleran, senior vice president, Nissan U.S. and Marketing and Sales. "Ariya leverages our decade of expertise selling mass-market EVs, uniquely positioning Nissan and our dealers to deliver both a thrilling vehicle and outstanding ownership experience." 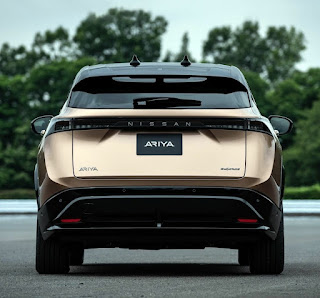 The company says the Ariya will be a cornerstone to the Nissan NEXT global transformation plan and is the first production model to represent the company’s new electrified brand identity.
Nissan has for years sold electric vehicles like the Leaf, but this SUV is taking this to the next level.
Visually, this crossover bears a scary similarity to several others hitting the market this year and next. The front end, at least, bears Nissan's signature styling, but the sides and rear could be mistaken for a Hyundai, or a KIA. Or the new electric Ford Mustang SUV.
Not that it's in any way unpleasant to look at, it's just that once a trend gets started, every car company copies it, endlessly.
Nissan has announced a target that more than 40 percent of its U.S. vehicle sales by 2030 will be fully electric, with even more to be electrified.
___________________________________
Auto Styling News is a blog that covers car concepts, newly released models, and the auto industry.
Posted by Stephen at 12:00 PM No comments: 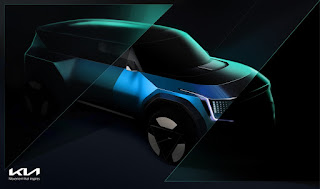 Kia has revealed the first official images of the Kia Concept EV9, an all-electric SUV concept that they say "embodies the company’s commitment to become a sustainable mobility solutions provider." 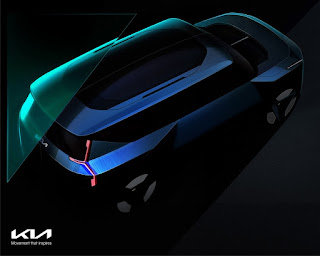 Following the launch of EV6, the Kia Concept EV9 is a glimpse into the future direction of the all-electric SUV, combining progressive design, state-of-the-art tech, and an advanced all-electric powertrain in one package.
The first visuals of the concept SUV show a sleek, ultramodern exterior design, the schematics of which hint at a contemporary recreational treatment that’s brought to the fore by an upright stylistic stance that suggests movement and fluidity.
From above and the rear, the vehicle shows it is not afraid of angles, and sharp ones at that. Rear lights dance down the sides of the rear window, and the windows themselves look smaller than what would normally be on the production vehicle, reminding one of certain cheap and Dodge vehicles of the last decade that had some compromised visibility because of styling. But these are very sketchy and unclear renderings, so they may be misleading.
The renderings illustrate a highly conceptual cabin that has been honed to give the driver and passengers a light, flexible interior space. A stunning interactive ultra-wide display screen and a radical new take on the traditional steering wheel (which resembles the Tesla Plaid's half steering wheel) are just two of the standout interior features.
The Kia Concept EV9 preview images have been revealed ahead of AutoMobility LA, which starts next week. Kia will unveil its all-new electrifying take on the SUV form at 11:15 a.m. (PST) on November 17 at the LA Convention Center. 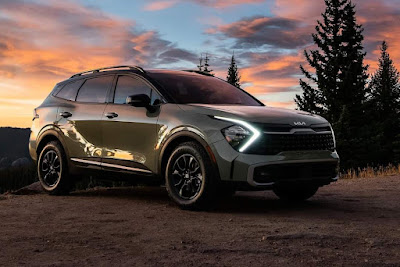 The renewal of KIA's lineup continues with the next generation of the Sportage SUV, the company's oldest nameplate. In North America, the model will debut as a 2023 when it does arrive next Spring.
As KIA’s longest running nameplate, which pioneered its segment, the Sportage undergoes its most significant change to date as the fifth generation is unveiled.
It was developed as part of the company's new global brand transformation, “Movement that Inspires."

Up front, the Sportage sports a new look that signifies a break with previous styling.
KIA says this "Opposites United” design philosophy "blends futuristic yet rugged design elements."
It has new, aggressive, boomerang-like headlights and running lights that are integrated into a grille that spans the entire width of the vehicle. (One wonders if the right lamp is designed to remind us of the letter K.)

The beltline is steep at the rear, which suggests there could be problems with rear three-quarter visibility.
The back end is once again equipped with lights that extend the vehicle’s width and are similar to those of the Korean company's upcoming electric model, the EV6.
Overall, this smoothe and sculpted redesign will likely prove to be a hot seller for the Korean automaker. It follows design trends in the industry and considerably amps up its own brand styling.
___________________________________
Auto Styling News is a blog that covers car concepts, newly released models, and the auto industry.
Posted by Stephen at 12:00 PM No comments: 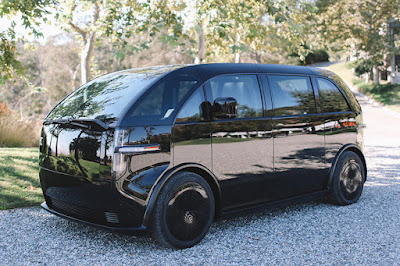 There was a time when many auto industry insiders were concerned that California-based EV startup Canoo was not going to make it.
Last April, Hyundai withdrew from a previously signed deal to help develop Canoo's skateboard multi-purpose EV platform. No doubt this was a major hit for the start-up, but it refused to give up.
This week, Canoo announced it's signed an agreement with Panasonic to supply batteries for its curvaceous, yet box-like Lifestyle Vehicle. Canoo is also developing a Tesla Cybertruck-rivaling truck, MPV, delivery van, and a sedan, all from the same platform.
2023 is still the rather ambitious sale date for these vehicles, and the plants have not been built in which they will be produced.
Yet, it's easy to find yourself reading for them, and hoping they can make it go of it. If they do, Canoo who have brought an electric van to market before Volkswagen, which has promised a Boomer-pleasing, nostalgic electric van every year for the past 10 years. But that project always seems 5 to 10 years away.
___________________________________
Auto Styling News is a blog that covers car concepts, newly released models, and the auto industry.

Worldwide Magnesium Shortage Could Shut Down The Entire Auto Industry 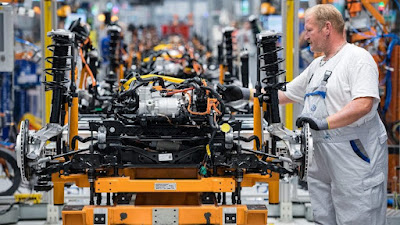 Experts say the car shortage currently plaguing the United States and other countries could get much worse due to a magnesium shortage in China and across the globe.
An energy crisis in China, which involves the country shutting down factories to conserve power, has created a shortage of magnesium production from the country that supplies 85% of the world’s supply that is used to make many essential car parts, according to Jalopnik.

Magnesium is used in many aluminum alloys used to manufacture body panels, fuel tanks, brackets, brakes, axles, and other components of automobiles.
___________________________________
Auto Styling News is a blog that covers car concepts, newly released models, and the auto industry.
Posted by Stephen at 12:00 PM No comments: 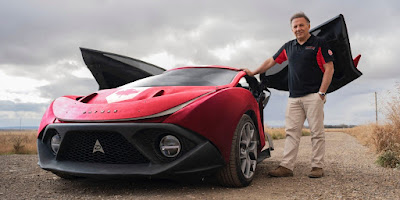 Toronto-based Daymak has launched an initial prototype of the Daymak Spiritus. The three-wheeled electric vehicle is one of the first models in the company’s premium Avvenire EV line, reports Electrek


The Avvenire line includes a wide range of EVs, from smaller electric bicycles to this three-wheeled EV and even a flying vehicle. It’s a huge leap forward for a company mostly associated with a vast selection of electric bicycles and scooters.
The Daymak Spiritus prototype the company unveiled is a light electric vehicle with a car-like look, at least from the front.
From any other angle, the three-wheeler - and two-seater - looks rather unique. Its single rear wheel gives it a tadpole tricycle design and creates an aerodynamic shape that plays a role in the Spritus’ 180-mile range rating.
The three-wheel design also qualifies the vehicle, which will be priced just under $20,000 - as a motorcycle in nearly every jurisdiction, meaning it doesn’t have to conform to the same rigorous standards as passenger cars.
___________________________________
Auto Styling News is a blog that covers car concepts, newly released models, and the auto industry.
Posted by Stephen at 12:00 PM No comments:

In Third Quarter, Tesla Delivers A Record Number Of EVs 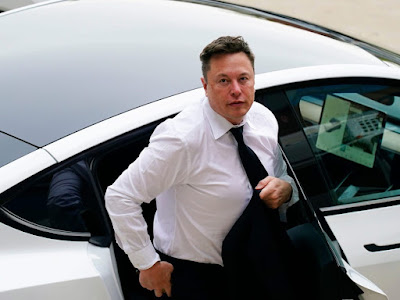 Tesla says it has delivered a record number of electric cars in the third quarter, beating Wall Street estimates after CEO Elon Musk asked staff to "go super hardcore" to make a quarter-end delivery push.
Tesla has weathered the microchip shortage crisis better than rivals, with its overall deliveries surging 20% in the July to September period from its previous record in the second quarter, marking the sixth consecutive quarter-on-quarter gains.
___________________________________
Auto Styling News is a blog that covers car concepts, newly released models, and the auto industry.
Posted by Stephen at 12:00 PM No comments: